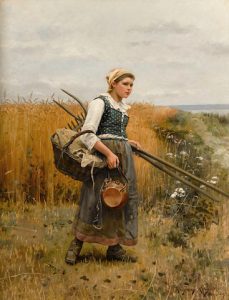 Realism art emerged in the 19th century  to portray those in poverty. Life of peasants enduring hard labor was painted by artists like Jean-Francois Millet. However, artist Daniel Ridgway Knight chose a different approach. He depicted French peasantry as people involved in leisurely activities. The upcoming auction by Bonhams offers a similar countryside scene titled Girl in harvest field at the highest estimate.

Another highlight is a village scene by the Moravian painter Joža Uprka. The featured painting portrays villagers heading towards the farms carrying their tools and lunch pails. Paintings by artists like Emile Vernon, Antoine Blanchard, Félix François Georges Philibert Ziem, and others are also a part of the auction. Explore the full listings and register to bid online on Bonhams.