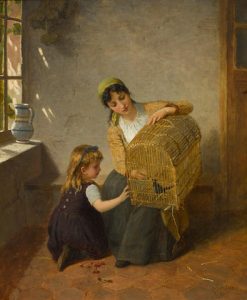 Jean-François Millet’s Laitière Normande (Norman Milkmaid) is one of the highlighted lots in the upcoming 19th Century European Paintings sale, presented by Bonhams. The work shows a milkmaid with an outstretched arm balancing a copper jug on her shoulder. It shows Millet’s fascination with the realistic imagery of the 19th-century French peasant class. As Alexandra Murphy wrote in her catalog note for a previous sale of the piece, “Millet’s deep affection for his native Normandy remained central to his work long after he settled in Barbizon.” Prior to a 2002 Christie’s auction, the painting had not seen by the public at large for nearly 90 years.

The auction offers over 80 lots of fine art pieces, including works by Jean-Baptiste-Camille Corot, Richard Paton, and Louis Ernest Barrias. Corot’s Environs d’Arras, Borde de la Scarpe is among the key lots in the sale. Considered a leader in French landscape painting, Corot is best known for his plein-air techniques. Executed between 1860 and 1865, the piece was likely based on sketches he completed before his long stay in Arras, Italy. Register to bid for any of these lots on Bonhams.