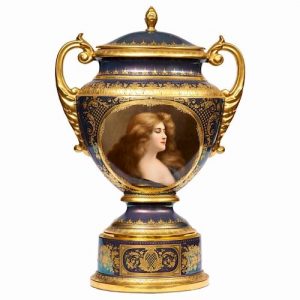 Many immortals in Chinese folk culture were believed to be real people. They were elevated to the status of immortals due to their charitable deeds on Earth. In the upcoming 19th-20th Century Decorative Arts auction, presented by Solomon Treasure, the lot with the highest estimated value is a coral sculpture of five female immortals. The five women are shrouded by flowers in this piece carved in red coral. Like this sculpture, the 172 lots in the 19th-20th Century Decorative Arts auction are decorative pieces from disparate places, including China, France, and India.

Another Chinese coral sculpture available in this auction depicts a pine tree and a group of scholars. In the last coral piece, flowers surrounded the female immortals. In this piece, the pine tree and its budding flowers are the focus, while small Chinese scholars are nestled throughout its branches.

Beyond Chinese sculptures, one of the most notable lots is a silver statue of Michael Jackson. The piece is by Billa Dhand, an Indian artist known for his work with gold and silver sculptures. Produced after Jackson’s death and amid the controversies of his personal life, Dhand nonetheless chooses to represent Jackson with his more proud and public persona as the “King of Pop”.

William Shakespeare also appears in this auction with a bust of his likeness produced by French artist Albert Ernest Carrier-Belleuse. Belleuse was a member of the Société Nationale des Beaux-Arts and lived in several countries, including Shakespeare’s native England for five years. You can view each lot and register to bid on Bidsquare.