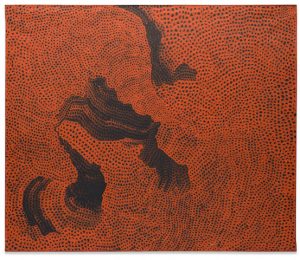 Years before Yayoi Kusama could escape to Kyoto and later New York City, her only respite from her overbearing family was visiting a river that flowed behind her house. Two early Kusama works available in an upcoming Bonhams auction, Hudson River and Mississippi River, reflect these moments of tranquility. Kusama created the river paintings in 1960, two years after moving to America, combining her childhood memories with the iconic rivers of her new home. These paintings are early examples of Kusama’s Infinity Net technique in red, the black dots mirroring the numerous pebbles Kusama saw along the riverbed as a child.

With tensions still high after World War II, the late 1950s were not an ideal time to emigrate from Japan to the United States. When Yayoi Kusama moved to New York City, fewer than 5,000 Japanese people lived in all of New York State. Kusama came to NYC with a suitcase full of artwork, including TREES, to help pay for expenses. Created in 1953, the seemingly errant dots of TREES are an early precursor to Kusama’s Infinity Net technique. Long, violent brushstrokes to the left, right, and towards the bottom eventually transform into a square pattern, finding order amid the chaos. Register to bid and view each of the lots on Bonhams’ website. Those interested in learning more about this event can read Auction Daily’s extended coverage.