Worlds Beyond: Fine Books and Manuscripts 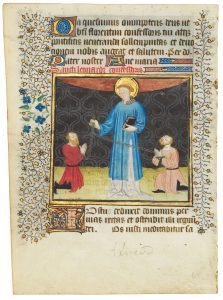 Items included in the upcoming Fine Books and Manuscripts auction, offered by Christie’s, range from medieval illustrations and classics of Russian and German literature to early maps and atlases. Among the items up for auction is David Roberts’ copy of what many consider to be his greatest work, titled The Holy Land, Syria, Idumea, Arabia, Egypt & Nubia. This is a first edition copy of the artist’s pictures of the Middle East, and the lot includes a complete set of tinted proofs. Also up for bid is a Hendrik Van Schoel map derived from Arnoldo di Arnoldi’s single-sheet map. Only three other copies of this map have crossed the auction block.

Among the rare books in the sale are two volumes from the first collection of verses published by Alexander Pushkin. The poems in the collection were organized by year so readers could see the progression of Pushkin’s style, though they were carefully examined by Russian censors. A more contemporary book available in this sale is the first edition of Vladimir Nabokov’s first book, Stikhi, published at his own expense while the author was still in school. This book did not pass muster with the censors and most copies were destroyed. View any of these lots and register to bid on Christie’s.