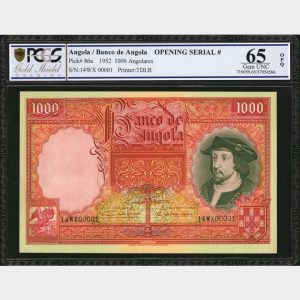 Prince Edward of Wales visited Canada after the end of World War I in 1919. During this tour, the Prince gained popularity among the Canadians due to his informal dressing style and mannerisms. To commemorate his visit, the Merchants Bank of Canada published several Prince of Wales five-dollar notes. Circulated beginning in November of 1919, the Prince of Wales Canadian dollars are among the most popular bills printed by the Merchants Bank of Canada. The upcoming auction, presented by Stack’s Bowers Galleries, will offer one of these rare five-dollar notes with the serial number 000001. The note bears a Prince of Wales portrait on the front and the bank’s seal on the reverse.

Another highlight is an August 1st, 1916 Zanzibar ten-rupee note featuring eight fruit pickers on the right and a dhow or boat on the left. Zanzibar was a famous trading center for spices and did not have official currency until 1908. The subsequent years saw the creation of the one rupee and five hundred rupee notes. However, in 1936, the printing of Zanzibari notes was stopped. Few surviving examples come to market today. The World Paper Money – Session A sale also offers Leeward Islands shillings, Republica de Panama balboas, and Indian rupees. Interested collectors can explore the full listings and register to bid online on the Stack’s Bowers Galleries website.