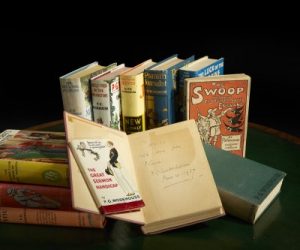 The Wodehouse Collection of William Toplis, offered by Freeman’s, is made up exclusively of items owned by or related to the British writer P.G. Wodehouse. Perhaps best known as the creator of the fictional gentleman Bertie Wooster and his valet Jeeves, Wodehouse was one of the most widely read humorists of the 20th century. He was a novelist, playwright, screenwriter, and more.

Several of the lots up for bid are in the Jeeves canon, including a first edition, first issue copy of the book Carry On, Jeeves. This collection of ten short stories by Wodehouse was first published in the U.K. in 1925. The first story in the book is titled “Jeeves Takes Charge” and describes the arrival of Jeeves as Wooster’s new valet. Also in the Jeeves canon is a typescript of Do Butlers Burgle Banks, which includes extensive handwritten revisions and annotations by Wodehouse. The lot also includes a copy of the first American edition and the first English edition of the final book.

Beyond Jeeves’ material, there are also portraits of the author’s family members, his personal scrapbook, an autobiographical typescript, and more. View any of these lots and register to bid on Freeman’s.