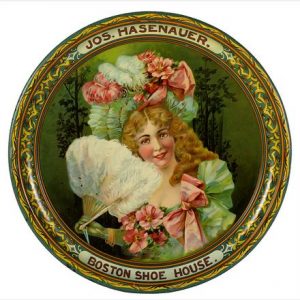 The Genesee Brewing Company, formerly known as the Aqueduct Spring Brewery, was founded in 1938 by Louis Wehle. It was the first-ever operating brewery in Rochester, New York, and it eventually became one of the largest breweries in the United States. The upcoming William Morford Premier Auction, offered by Antique Advertising Auctions, will offer a Genesee Brewing Co. glass sign designed by Tuchfarber Co. Genesee hired Tuchfarber to create an advertising sign promoting both the brewery and their products.

A standout lot in the auction is a lithograph over cardboard sign for Wrigley’s brand chewing gum. The Wrigley’s sign shows its products of four different flavors: Spearmint, Double Mint, Sugar-Coated Peppermint, and Juicy Fruit. Wrigley’s Juicy Fruit was introduced just a few months before Spearmint was launched in 1893. Over 100 years later, the gum remains popular among many Americans. Also available in the sale are signs for Hall’s Hair Renewer, as well as Sleepy Eye Flour. View these items and register to bid online on the Antique Advertising Auctions website.