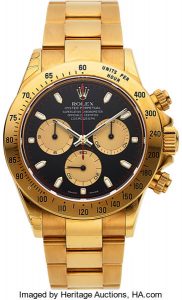 Even though Bulgari created the first Serpenti jewelry design in the 1940s, it first rose to prominence in 1963 when Elizabeth Taylor was spotted on film wearing a Serpenti bracelet in Cleopatra. Drawing its inspiration from ancient Greek and Roman mythology, the coiled serpent-shaped design became an overnight success and a glamorous symbol of luxury. An 18 karat gold Serpenti bracelet with ruby eyes is featured in Heritage Auctions’ upcoming Timepieces Signature Auction.

A gold Rolex calendar wristwatch with moon phases is also highlighted. The piece includes a leather strap and gold hour markers. Launched in 1950, this particular watch was only produced for a few years. It was the first automatic watch to include a triple calendar and moon phases within a water-resistant case. Another notable lot is a Heuer stainless steel chronograph wristwatch with a reverse panda dial, subsidiary registers, and a minute bezel. Made in 1963, Jack Heuer produced these timepieces after recognizing a surge in luxury travel. Visit Heritage Auctions to view the entire collection and to place a bid.