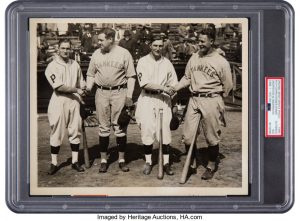 Heritage Auctions will make sure you relive the moments of sports history in its upcoming Vintage Sports Photography Catalog Auction #50017.  The greatest baseball player of all time- Babe Ruth has been a legend in the game. Every Red Sox game that Babe Ruth played, attracted a lot of attention. The 1919 Babe Ruth original news photograph is one of the most sought after and highly valued collectible of the auction.