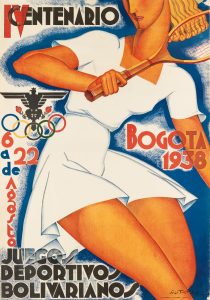 The Vintage Poster auction, offered by Swann Auction Galleries, consists of a large variety of classic posters, many of which will be highly recognizable even to the non-collector. One of the most well-known and easily identifiable of the sale is James Montgomery Flagg’s “I Want You for U.S. Army” poster (circa 1917), featuring a grimly serious Uncle Sam making it clear that every viewer is needed to join. James Montgomery Flagg was an American comics and illustration artist who worked in media ranging from fine art painting to cartooning, but he is best remembered for his political posters, several of which can be found here.

Another recognizable artist with more than one poster up for bid is Henri de Toulouse-Lautrec. Toulouse-Lautrec was a French painter, printmaker, draughtsman, caricaturist, and illustrator, whose immersion in the colorful Paris life of the late 19th century allowed him to produce an enticing collection, sometimes provocative, even decadent, images of the time. He was among the best-known Post-impressionist painters, and his poster art will be familiar to both collectors and casual browsers, making this quite a popular bid.

One of the more unusual posters in the set is by Tadanori Yokoo titled “Word Image, 1968.” A large portrait-oriented poster that measures 49×12 inches, this piece is advertising the seminal exhibition of 20th-century posters from the Museum of Modern Art’s collection. Rita Reif referred to the show as “a landmark presentation that helped define the medium for scholars, graphics specialists, and collectors” (New York Times, June 26, 1968). The poster consists of four mouths that seem to be announcing the arrival of this popular art form while hovering above an all-seeing eye at the center of a burst of creativity. Tadanori Yokoo is one of Japan’s most successful and internationally recognized graphic designers and artists, and this will likely be one of the most sought after of the eight of his posters up for bid.