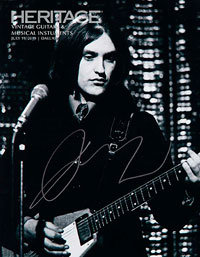 The transformation of an object into an icon is an almost undetectable process, and is often best realized in retrospect. The Kinks led the way in the rock British Invasion, and lead singer Dave Davies’ 1958 Gibson Flying V electric guitar have since become such an icon. Presented in the upcoming Vintage Guitars & Musical Instruments Signature Auction offered by Heritage, are   over 150 classic guitars of all styles and eras. Electric guitars dominate the auction; highlights include a 1954 Fender Stratocaster sunburst and a whimsical Paul Reed Smith guitar designed for Dan Spitz of Anthrax. The headlining Kinks guitar shines but does not overpower the other interesting and affordable lots in this auction. Explore the available guitars and register to bid on Heritage.