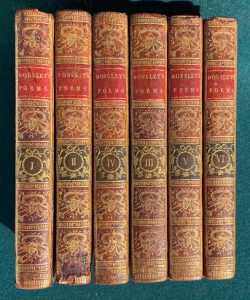 The upcoming US Auction #2 will include a selection of rare books and manuscripts, offered by Antiquarian Auctions. One of the featured works from popular culture is a copy of Gremlins by Roald Dahl in association with Walt Disney Productions. This lot was once owned by Dwight D. Eisenhower and includes his signature on the front free endpaper. This is the first book by Dahl and his only in association with Disney. Another popular culture item up for bid is the original artwork for a commemorative piece titled F UN 50 Cartoon Book. This was produced for the 50th anniversary of the United Nations in 1995. Though this book was never published, some of the cartoons were previously released elsewhere.

An older lot available in the sale is a first edition, first printing copy of Les Misérables by Victor Hugo. The first two volumes of this edition were published in Brussels a few days before the Paris version. A first edition copy of Webster’s dictionary, the Winchester edition of The Novels of Jane Austen, and early copies of Shakespeare’s complete works will be available as well. View any of these lots and register to bid on LiveAuctioneers.