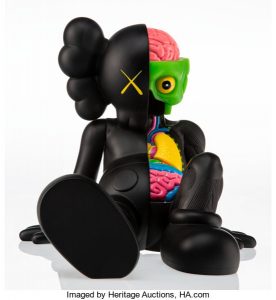 The upcoming Urban Art Monthly Auction, offered by Heritage Auctions, is anchored by several works from KAWS. Brian Donelly, known professionally as KAWS, is an American artist and designer. Featured in the sale are several examples of the artist’s signature Companion character. The figure is based on Mickey Mouse, with crossbones through his head and Xs where his eyes should be. A black chrome No Future Companion is highlighted.

Also featured in the sale is a set of three chairs by Japanese Superflat artist Takashi Murakami. Known for his work in fine art as well as commercial and fashion media, Murakami has placed motifs that are common to his work (colorful flowers, mushrooms, skulls, Buddhist iconography) onto three fiberglass chairs. These pieces were made in collaboration with Modernica and ComplexCon.

Other artists appearing in this sale include American street artist and OBEY Clothing founder Shepard Fairey, French 8-bit artist Invader, Japanese Pop artist (and member of Takashi Murakami’s Kaikai Kiki Collective) Chiho Aoshima, and others. View any of these lots and register to bid on Heritage Auctions.