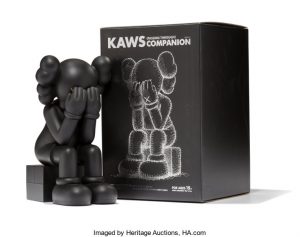 The Urban Art and Collectibles Online Auction, offered by Heritage Online is filled with items by KAWS, the former Disney artist Brian Donnelly. His work often consists of a cast of a character or motifs. His designs were originally painted in two dimensions, but were later realized as three-dimensional art and collectibles. KAWS’s works are exhibited in galleries and museums, held in many permanent collections, and are avidly collected by many popular artists and creators.

Among the lots creating early interest is the Passing Through Companion. This is a painted cast vinyl item produced by Medicom Toy and OriginalFake, Tokyo. The KAWS signature “Companion” sits and covers his eyes as if in embarrassment. The pose, reproduced here, was first used for KAWS’s first public sculpture, which debuted in Hong Kong’s Harbor City in 2010.

Another popular Companion piece is Resting Place, in which the same figure as Passing Through appears to be in recline, as if relaxed and exposed. Though, perhaps, still not quite comfortable in his own popularity.  The figure that appears most confident and ready for action is Chum. Produced by Toy Group, Tokyo, Chum appears to be modelled after the iconic Michelin Man, a beefy and iconic American ad character made entirely of tires. It stands with arms akimbo, chest thrust forward, ready for whatever the world may throw at him (including your enthusiastic bids). View any of these lots and register to bid on Heritage Auctions.