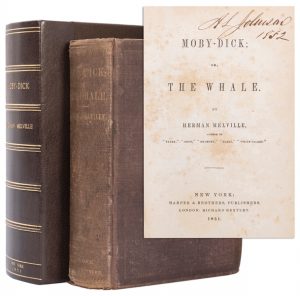 Georges Henri Victor Collot was a French explorer, colonial official, soldier, and spy. Under the command of Pierre Adet, who was then French Minister to the United States, Collot set out on a secret reconnaissance to assess the Ohio and Mississippi valleys. His mission was to survey the military capacity on the American and Spanish frontier sides of the river. In this pursuit, he navigated and drew detailed maps along the way. Georges Henri Victor Collot’s maps of the Ohio River will be available in the upcoming Fine Books & Manuscripts sale, presented by Potter & Potter Auctions. The map set comes with various notes and markings to indicate “dangerous” areas.

The catalog also offers a selection of books by Herman Melville, Charles Dickens, and J. K. Rowling. Leading the listings is Charles Darwin’s The Expression of the Emotions in Man and Animals. It focuses on facial muscles and expressions in humans and mammals. George Harris, a prominent psychologist and the book’s recipient, remarked, “With this book, Darwin founded the study of ethology (animal behavior) and conveyance of information (communication theory) and made a major contribution to psychology.” Register to bid for any of these lots by visiting Potter & Potter Auctions.