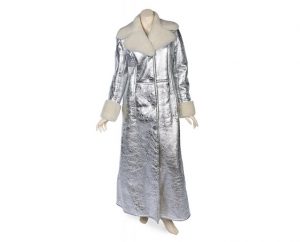 At the age of seven, Janet Jackson, the tenth and youngest child of the Jackson family, gave her first performance at the MGM Casino in Las Vegas. By 19, she was recognized as the Queen of Pop and lauded for her cultural impact on the music industry. An upcoming Julien’s Auctions sale will offer a selection of outfits and costumes worn by Janet Jackson during her concerts and music videos. A floor-length metallic silver coat designed by Helen Storey is one notable lot. The artist wore the coat during her 1995 music video, “Scream,” which also featured her brother Michael Jackson.

Another highlight of the auction is a 1956 Chevrolet pickup truck. Designed by Chuck Jordan, this 3100 Cameo is an upscale version of GM’s traditional 3100 series. A 1990 painting by Chester Higgins Jr. titled Eyes of Allah, Islam, is also on offer, along with other items from Jackson’s personal collection. Visit Julien’s Auctions to view the entire catalog or register to place a bid.