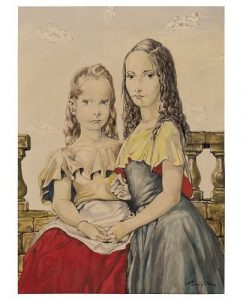 Léonard Tsuguharu Foujita, a Japanese-French artist, was known for blending Eastern and Western elements in his works. In his paintings, Foujita combined oil paint with a blend of sumi ink. By the early 1920s, it became his signature style which he adapted to painting nudes and self-portraits. A 1957 artwork by Foujita, titled Les Deux Amies, will be available at the upcoming auction of American and European Art, presented by Hindman. It is signed and is accompanied by a certificate of authenticity.

Paintings by other notable artists are also featured in the event, including an oil on canvas by American artist William Glackens. Like most of his other works, Girl with Violin reflects Glackens’ interest in recreation and entertainment scenes. Artworks by Robert Salmon, Daniel Garber, and other American artists are available as well. To view the full catalog or to place a bid, visit Bidsquare.