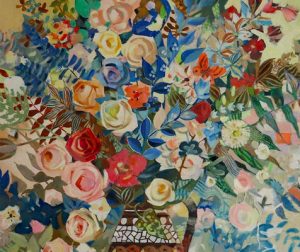 Clarke Auction Gallery presents over 200 disparate lots that were either left in storage or were never picked up by the winning bidder after an auction. Highlighted in this sale is a drawing of Colonel Claus Count Schenk von Stauffenberg, the German officer who led an unsuccessful assassination attempt on Adolf Hitler. The drawing is by Skitch Henderson, a noteworthy 20th-century pianist and composer. Later in his life, Henderson became more involved in the art world, including opening his own gallery, The Silo.

Also featured is an unnamed painting by Hyunsoo Kim. Dozens of white lines run along the bottom of this painting, while longer black lines meander across the top. Both colors frame the painting’s focus: a swirled mass of green, orange, and black paint. As Kim describes in her Contemporary Art Curator profile, she uses acrylic paint and abstract forms to convey emotion. “I attempt to depict the inner state of a situation,” says Kim, “…that represent[s] a microcosm of life.”

Paintings by Peter Diem and Phil Liborbaum, as well as a sculpture by Mortimer Borne are also available in this auction. View the auction catalog and register to bid on Bidsquare