Treasures from the King of Pop Michael Jackson 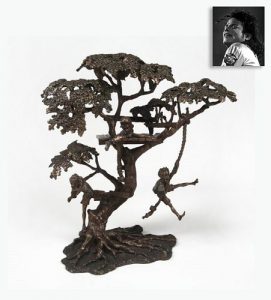 Michael Jackson moonwalked his way to stardom. From being the youngest member of the Jackson 5, he went on to become an American pop icon. Along with the music he created, the King of Pop was famous for his extravagant lifestyle. For the first time, 69 items from his fabled Santa Barbara ranch will go under the auction hammer.

This auction, offered by Guernsey’s, is the result of a relentless fan’s pursuit to acquire some of Jackson’s possessions. It will include many bronze sculptures owned by the artist. Monkeying Around Tree House is a signed bronze sculpture from Mark Hopkins. In this piece, children are shown playing in a treehouse and swinging around the branches. A pair of gilt malachite candelabras featuring foliage, flowers, and dolphins is noteworthy as well. Collectors interested in memorabilia can find the Jackson 5’s first label contract signed by Joe Jackson and a stage-worn costume ensemble from the band. View and bid for the mentioned items and more on Bidsquare.