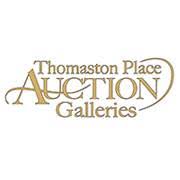 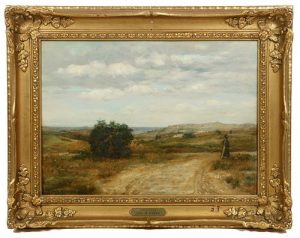 Featured on the second day of Thomaston Place Auction Galleries’ Splendor sale is a 19th-century landscape painting by Impressionist artist William Merritt Chase. The work shows a person walking down a path, framed by Long Island’s Shinnecock Hills. In his late career, William Merritt Chase transitioned to a lighter color palette and adopted more fluid brushstrokes. This painting is an example of both, produced en plein air at one of the locations that most inspired Chase.

Collectors of 19th-century landscape paintings can also consider William Bradford’s The Coast of Labrador. Bradford is best known for his Arctic expeditions and the paintings, drawings, and photographs he produced on the journeys north. Bradford’s trips to the Arctic were not without risk. The artist once found himself stranded for two weeks on a ship surrounded by ice. One of his favorite subjects was Labrador, depicted here with violent waves crashing against the shore. Bradford often experimented with light in his work. In this landscape, bright rays of sunlight peek through an otherwise cloudy and ominous sky.

Beyond paintings, bidders will also find decorative art pieces, such as a 13th-century Chinese jue. Used across many centuries in ancient China, jue vessels carried wine in ceremonies honoring ancestors. Decorations on these vessels, called taotie, often depicted beasts, such as the one etched into the handle of this jue. Register to bid and view each available lot on Bidsquare.