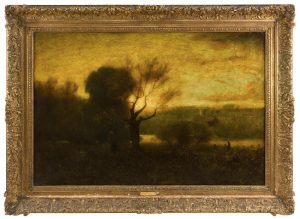 As the first day wraps up with spirited lots, the second day of the auction will be ready to surprise you. Separating itself from the crowd of items, is a rare lighthouse clock by Simon Willard & sons, with the highest estimated value of $90,000; this antique piece is believed to be among the first American clocks to function as an alarm and amongst less than 100 examples of such lighthouse clocks, still in existence. Similarly, adding increasing value on the day of the auction is the work of Ralph Eugene Cahoon, depicting an artist, painting in a canvas of posing mermaids on a beach. To find more about such items, visit Eldred’s, for a chance at a proud collection.