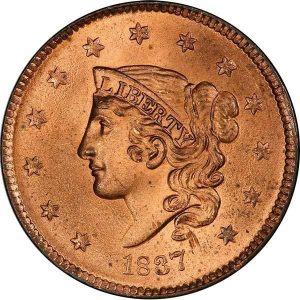 A 1915 Panama-Pacific round coin is featured in the upcoming Regency Auction, presented by Legend Rare Coin Auctions. The United States mint created these coins to celebrate the opening of the Panama Canal, and they were made available only at the Panama-Pacific Exposition in San Francisco. It was the first time the United States offered a $50 gold coin and, due to the high denomination, only sold 483 of them at the event. The auction house notes that there are only 13 MS64+ graded examples of the coin, including the one available in this sale.

Several Buffalo nickels will also be offered. This includes one from 1937, the penultimate year of the coin’s minting. The Buffalo nickel was part of a government initiative to beautify American coins at the turn of the 20th century. They were replaced in 1938 by the Jefferson nickel, which is minted to this day. Rounding out the featured lots is a 1926 Mercury dime. The ten-cent coin is known as the Mercury dime because many mistook Lady Liberty— depicted on the coin’s front— for the Roman god Mercury. Those interested in this or any other lot can register to bid on the auction house’s website.