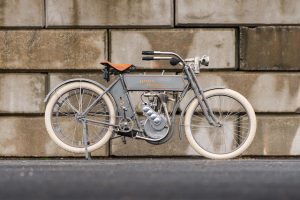 In 1901, at the age of 21, William S. Harley designed an engine well suited for a bicycle. After a few years, Harley and his childhood friend Arthur Davidson began expanding the design to build the first motorcycle. This was their very first attempt towards the production of the modern motorbike. In 1907, Harley-Davidson Motor Company was incorporated. Today, the company is one of the most popular and largest American manufacturers of custom, touring, and cruiser motorcycles. A 1910 Harley Davidson Single is a highlight of the upcoming Las Vegas Motorcycle Auction offered by Bonhams.

The auction will also include a prototype of the popular Indian Big Base Racer. This bike is claimed to be one of 13 pre-production models produced in 1941. Another motorcycle featured in the sale is a 940 Crocker Big Tank V-Twin produced by Albert Crocker, the founder of Crocker Motorcycles. According to Bonhams, “It’s been almost 80 years since Al Crocker’s last V-twin roadster left the factory on Venice Blvd. in East Los Angeles.” To view more items and register to bid online, visit Bonhams.