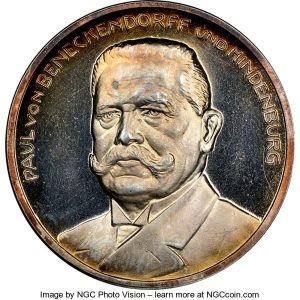 The taler was used as a currency in Europe for almost 400 years, first minted around the mid-15th century. It acquired different forms in terms of its precious metal content and its value over the years. The Prussian taler was used as a standard by the German states up until 1857.  After the formation of a united Germany in 1871, Wilhelm I was crowned the first Head of State. Heritage Auctions features currency used during his reign, including an 1867 Wilhelm I taler minted in Frankfurt.

Prussian talers predating Wilhelm I’s reign are also offered, including Friedrich Wilhelm IV talers from different years and mints. Medals marking historic occasions are another highlight of the auction. A silver medal reading “100th Anniversary of Prussia” was struck to commemorate the Prussian Kingdom’s centennial.  It depicts the first five monarchs of the country. Collectors can explore the entire coin and medal listings and register to bid online on Heritage Auctions.