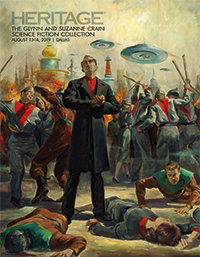 The Glynn and Suzanne Crain Science Fiction Collection Signature Auction, offered by Heritage Auctions, focuses on three main areas of Science Fiction collectibles: Original cover art, pulp magazines, and books. Among the more valuable pieces in the collection is a painting by James Allen St. John which was used for the first edition, dust jacket of At the Earth’s Core in 1922. St. John was an early and highly impactful fantasy illustrator and it would be difficult to overstate the influence he had over later artists in this genre.

One of the books for sale that is sure to be highly sought after is a first edition, inscribed copy of Isaac Asimov’s I, Robot. This is a near-fine copy of a science-fiction classic, comprised of nine of his early “positronic brain” robot stories originally published 1940-1950. In a bit of a more contemporary vein, there is also a complete collection of J. K. Rowling’s Harry Potter books, all first American editions, the first four of which are signed by the author. Though a more recent addition to the fantasy canon, this collection’s popularity has already attracted a lot of interest and it is likely to fetch well above its estimated price (early bidding has already doubled its valuation). View these lots and register to bid at Heritage Auctions.