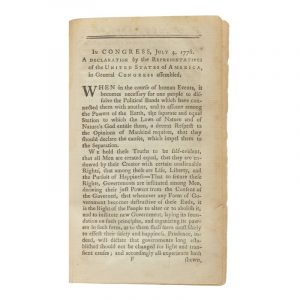 A major piece of printed Americana will go up for sale in the upcoming Highly Important Printed and Manuscript Americana event, presented by Sotheby’s. Coming from Barbara and Ira Lipman’s estate is the first book-form printed version of the Declaration of Independence. Patriot printer Robert Bell of Philadelphia published the book on July 8th, 1776. The book also includes The Genuine Principles of the Ancient Saxon, or English Constitution by Demophilus (also known as George Bryan).

The Bay Psalm Book – the first book printed in British North America – is another highlight of the collection. Published in 1640, The Bay Psalm Book is a sacred text meant for regular public worship. The book contains 150 Hebrew psalms, translated by John Cotton, Richard Mather, Thomas Welde, John Eliot, and others. There are only 11 surviving copies of this edition. Also available is a first edition copy of Meriwether Lewis and William Clark’s The Expedition. Under President Thomas Jefferson’s direction, the Lewis and Clark Expedition began to explore the newly acquired North American West in 1804. The expedition proved beneficial in mapping out uncharted land, rivers, and mountains. Register to bid and view each of these lots by visiting Sotheby’s.