The Estate of Oleg Cassini 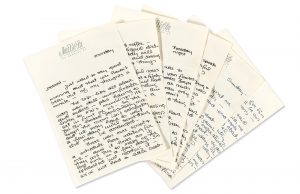 Oleg Cassini was an important confidant and the official designer for American First Lady Jacqueline Kennedy. As inauguration day drew closer for her husband, John F. Kennedy, it was Cassini she confided in. “Protect me,” she writes in a letter available in the upcoming Doyle auction, “as I seem so mercilessly exposed & don’t know how to cope with it.” And protect her he did, in part by designing the iconic “Jackie Look” which allowed her to project confidence even in trying times. The auction of Oleg Cassini’s estate, presented by Doyle, includes books, furniture, and paintings owned by the designer. It also offers a look into Cassini’s relationship with Jacqueline Kennedy (later known as Jacqueline Kennedy Onassis). Among the most notable lots is a collection of drawings, correspondence, and clippings outlining designs for Mrs. Kennedy. Provided in this lot is a full page of instructions and five large line drawings, both directly from Mrs. Kennedy for Cassini’s design coordinator. Several lots also speak to Cassini’s relationship with American actress and Princess of Monaco Grace Kelly, who is known for such famous roles as Lisa Fremont in Hitchcock’s Rear Window (1954). Among the most notable lots that illustrate this relationship is a series of four autographed letters. While most of the letters are cordial, one offers an unexpected look into a tumultuous moment in their friendship: “You have upset me so that I could die,” Kelly writes, “I just don’t understand your attitude.” Among the other items with a high estimated value from Cassini’s estate are a 1987 Rolls Royce Silver Spur and a side table credited to Royal Cabinet Maker James Moore. View the items in this auction and register to bid on Doyle’s website.