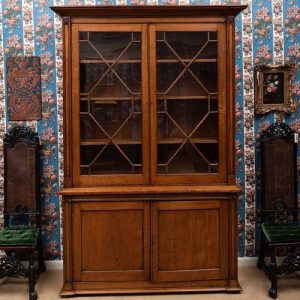 Sir Walter Raleigh was the first Englishman to encounter mahogany during one of his voyages to the West Indies in 1597. As his ship needed to be repaired, he used the native mahogany and was impressed by its quality. He loaded some for his voyage back to England. Folklore states that when Queen Elizabeth commented on the wood, Raleigh commissioned a table for her. This table commenced England’s tradition of fine mahogany furniture, a practice that reached its peak during the 18th century. The upcoming English Interior auction, presented by Stair, features a selection of mahogany furniture. A key lot among them is an early George III settee made of mahogany wood.

Also highlighted is a George III partner’s pedestal desk. It features six frieze drawers and two small cupboards. Another notable mahogany item is a Regency period dining table. The piece is raised on acanthus and gilt-metal feet. Beyond furniture, the auction will include a 1905 oil painting from Rex Vicat Cole. An English landscape painter, Cole was best known for his depictions of the area surrounding Bolton Abbey. For more information and to register to bid, visit Bidsquare.