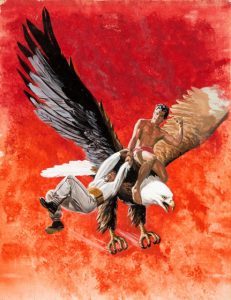 After years of working as a pencil sharpener salesman, Edgar Rice Burroughs decided to try writing. He would go on to create Tarzan, among other notable characters. “I made up my mind that if people were paid for writing such rot as I read,” said Burroughs in a Washington Post article, “I could write stories just as rotten.” The Edgar Rice Burroughs Collection event, presented by Heritage Auctions, offers first editions of Burroughs’ books, as well as notable adaptations of his “rotten” stories.

Among the featured lots is a first edition copy of the Jungle Tales of Tarzan (1919). The short story collection was the sixth that Burroughs published in the Tarzan series. The stories take place in Tarzan’s teenage years. One is “The Capture of Tarzan,” in which cannibals kidnap him. Also available in this auction is a January 1917 copy of Blue Book, in which individual stories from Jungle Tales of Tarzan were initially published as “The New Stories of Tarzan.”

Tarzan’s popularity led to television, film, and comic adaptations. Coming to auction are several Tarzan Sunday comic strips by Burne Hogarth. This includes a segment from the “Tarzan and the Adventurers” story arc. Hogarth ran the comic from 1934 until 1950. This particular strip comes from Hogarth’s last year drawing Tarzan. Also representing the Tarzan adaptations is a photo binder of Buster Crabbe portraying Tarzan in both King of the Jungle (1933) and Tarzan the Fearless (1933).  The binder includes an autograph from Crabbe. An animation cell from Tarzan, Lord of the Jungle is also available. CBS produced four seasons of the cartoon in the 1970s and later combined its reruns with The Lone Ranger and Zoro cartoons to produce fifth and sixth seasons. Register to bid and view lots on the Heritage Auction website.