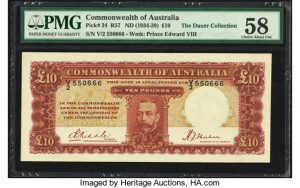 The Drs. Joanne and Edward Dauer Sale of World Banknotes, offered by Heritage Auctions, will offer rare paper currency from around the globe. Among the featured notes at auction are several from the Commonwealth of Australia, including a ten-pound note from 1918. The auction house estimates that there are only four of its type in existence. This particular note was pictured in the 25th edition of Renniks Australian Coin & Banknote Values.

Other rare notes in the collection include a one-pound bill from the government of the Turks & Caicos Islands, which only issued currency from 1903 until 1928. The population of the colony was between 4,500 and 6,000 people during this time, so there was no need for broad issuance of their currency. The note up for bid was the first of any type from the Turks & Caicos Islands to be submitted for grading. Banknotes from other locales include pieces from British West Africa, Singapore, Afghanistan, Lebanon, India, and Zanzibar. View any of these lots and register to bid on the Heritage Auctions website.