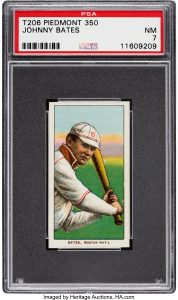 Part II of The David Hall T206 Collection Auction, offered by Heritage Auctions, is made up almost entirely (with one notable exception) of baseball cards from the T206 card series from a single collector. The tobacco card set known as T206 was issued in cigarette and tobacco packs from 1909 to 1911 by the American Tobacco Company. Due to its size, rarity and the quality of its color lithographs, each classic card from this series is highly valued by collectors.

The mythical Honus Wagner card, considered by many to be the most coveted for collectors is available in this sale. This card is rarely seen at auctions, partly because of its limited print run, and partly due to the lore behind the reason for that limit. Wagner himself halted the printing, but his motivation is in dispute. This mystery thus adds to the card’s lore and desirability.

The only non-card in this sale is an extremely rare Ty Cobb tobacco tin. Beyond the sheer rarity of finding this tin intact, it almost is completely absent of surface scratches, dents, chipping or flaking, and has been rated “Mint 9.” It also includes an aging tax stamp, still firmly attached. Collectors theorize that the Ty Cobb (Red-Portrait) cards that feature “Ty Cobb, King of the Smoking Tobacco World” were put into circulation inside one of these tins. Examples of this uncommon and valuable card are also offered here, creating a good deal of early interest from both browsers and bidders. Its striking portrait on a red background makes it worth taking a look. Learn more about any of these lots and register to bid at Heritage Auctions.