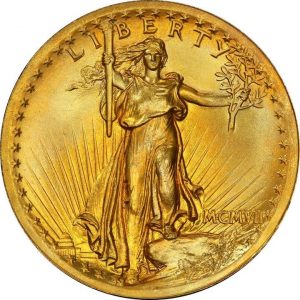 The Liberty head half eagle coin was the first US coin produced in San Francisco. With the California Gold Rush in full swing, the United States Government looked for ways to use the natural resource to spread wealth into the local and national economies. Much of the gold entered monetary circulation as a result. An 1854 Liberty head half eagle coin is available in the upcoming currency auction, presented by Stack’s Bowers Galleries. In addition to its connection to the Gold Rush, this coin also has one of the lowest production numbers of any U.S. coin in regular circulation. An 1875 Liberty head $20 double eagle coin will also be featured in the auction. Like the previously-mentioned lot, the 1875 Liberty head was primarily minted in San Francisco. However, JM Bullion notes that many more of these coins entered circulation, with approximately 1.6 million produced in total.

A 1796 Liberty Cap half-cent is also highlighted. The half-cent was the smallest denomination coin ever produced in the United States, first entering circulation with the Liberty Cap half-cent in 1793. The 1796 version of the coin depicts Liberty gazing to the right. The object behind Liberty is a Phrygian or liberty cap. Though primarily associated with the Roman Republic and French revolutions, the liberty cap was also a popular symbol of freedom in 18th-century America. Register to bid for this event on the Stack’s Bowers Galleries website. The gallery also holds multiple simultaneous sessions, which interested bidders can track on the website’s auction calendar.