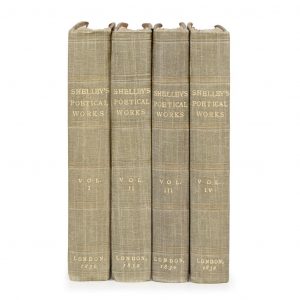 The third part of the Collection of Victor Niederhoffer, presented in the upcoming Freeman’s auction, features books and letters of historical significance. One of the highlights of the sale is a four-volume first edition of The Poetical Works of Percy Bysshe Shelley, edited by his second wife and fellow writer Mary Shelley. Published posthumously, this particular lot was inscribed by Shelley’s son, Percy Florence Shelley, to his half-sister Ianthe Esdaile. Though the senior Shelley did not see fame in his lifetime, his legacy marks him as a key lyric poet of the English language.

Also up for bid is a handwritten letter by a 23-year-old Winston Churchill. At the time of its writing, Churchill was serving as a cavalry officer in the 21st Lancers. The letter expresses his sympathy and regards for a friend and fellow soldier who had recently been killed. Another of the featured letters for sale was penned by author Ayn Rand to President Harry S. Truman, in which she argues against the Korean War.

Other featured pieces in this sale include framed notes written by Thomas Edison, a bound set of the complete works of O. Henry, a signed self-caricature drawing by Alfred Hitchcock, and more. View any of these lots and register to bid at Freeman’s.