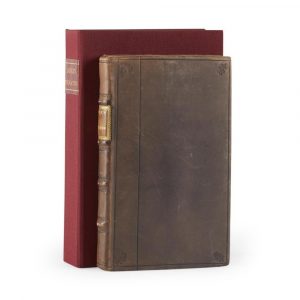 Part II of The Collection of Victor Niederhoffer Auction, offered by Freeman’s Auction, is anchored by a variety of books and rare letters from the like of Charles Darwin, Ernest Hemmingway, and John Locke. Of the many valuable lots is a framed letter by Thomas Jefferson “To the inhabitants of North Yarmouth in legal town-meeting assembled,” in which he defends the Embargo act of 1807. Also framed with the letter is a facsimile of the verso and a 19th-century steel engraved portrait of Jefferson.

Also offered is a handwritten letter by Ronald Reagan to his estranged daughter, Patti Davis. It is dated along the years following the end of his presidential term as he approached his eightieth birthday. The letter is full of melancholy regarding their estrangement, as can be seen in the following passage: “I can recall your mother coming home in tears after driving you to school. She couldn’t understand your complete silence even to the point of your not saying ‘goodbye.’ Was it having to share with a newborn brother? I remember a loving daughter who never let us leave the house without waving goodbye from the window.”

Among the many rare and valuable books is the Geological Observations on South America by Charle Darwin. This untrimmed first edition includes a folding map, five folding plates, three-line errata, and a 32-page publisher’s catalog. It is the 3rd part of the Geology of the Voyage of the Beagle, under the command of Capt. Fitzroy, R.N. during the years 1832 to 1836. It also includes an extra folding plate of shells at the back with a caption (this page likely serving as an advertisement for J.B. Sowerby Junior, in his function as a publisher). View any of these lots and register to bid at  Invaluable.