The Collection of Claire Tracy and Frank Glaser 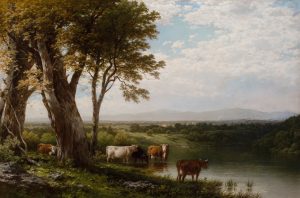 The Collection of Claire Tracy and Frank Glaser is offered by Doyle as a single-owner sale of American paintings, furniture, and decorative arts. Featured items include a portrait of a “Boy with a Red Book” by William Matthew Prior, several unique American weathervanes, and over 20 lots of late 19th through early 21st century Nantucket baskets.

Known for portraits of families and children, William Matthew Prior was the son of a shipmaster and a follower of end-times preacher William Miller, about whom Prior wrote two books. Approximately 1,500 of Prior’s portraits exist, though unsigned they closely resemble those of his contemporary Sturtevant J. Hamblen and are sometimes attributed to the “Prior-Hamblin School.” “Boy with Red Book” is recognized as Prior’s work alone.

Of the offered weathervanes, perhaps the most unusual is that of a fish, an animal not known for showing wind direction. The fish is cast from copper and zinc and is gorgeously patinated almost entirely green, to the point that it rather resembles an actual fish rather than a metallic one.

There are several high-value contemporary items at auction—especially for the basket collector–such as the nest of eight graduating lightship baskets by Harry A. Hilbert. These baskets were made in 1998 and each is signed and dated by the artist. There are many more basket lots for sale, including excellent examples by Jose Formoso Reyes, Bill and Judy Sayle, and Stanley Roop.

Explore these and many other items and register to bid at Doyle.