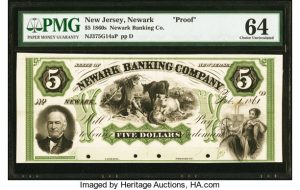 In 1816, President James Madison authorized the establishment of the Second Bank of the United States. At the time, private banks were printing too much money, causing high inflation rates and creating the need for another state-run bank. A $100 bill from the Second Bank of the United States is available in the upcoming online currency event, presented by Heritage Auctions. The bill is decorated with a bald eagle, a shield, and a ship in the harbor.