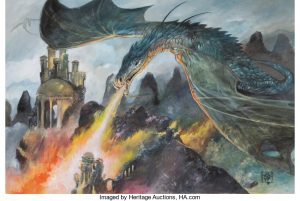 After making it big in the U.K. in the early 1960s, The Beatles were trying to gain some traction in America. Heavy hitters like Capital Records wouldn’t give them the time of day, but Vee Jay Records, mostly known for R&B artists, gave The Beatles a chance. Available in the Entertainment & Music Memorabilia Signature Auction, presented by Heritage Auctions, is the first pressing of The Beatles’ music in the United States. The Vee Jay Records acetate disc contains all the songs from the band’s debut album, Please Please Me, on two sides.

Beatles collectors will also find a 1966 poster advertising their concert at Shea Stadium in New York. Fewer than ten examples of this poster are known to still exist. This one comes to auction from a subway commuter who decided to pull it off the wall of his local station and held onto it for half a century.

HBO’s Game of Thrones is also represented in this sale with concept art from throughout the show’s run. That includes an original concept painting of Daenerys Targaryen’s dragons. The dragons are shown here setting an entire city ablaze, foreshadowing some of the show’s most controversial scenes. Those interested in this or any other lot can register to bid online with Heritage Auctions.