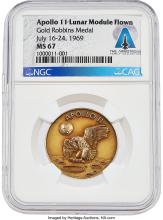 Own a piece of history with the third installment of the Armstrong Family Collection by Heritage Auctions.  On July 20, 1969, America had achieved what was previously unimaginable: a man had walked on the moon.  Neil Armstrong and the Apollo 11 mission’s monumental achievement has become synonymous with American pride and discovery. A culmination of what a nation is capable of.  What is not widely known is that the Apollo 11 astronauts took many items in their personal preference kit, on their eight-day journey. Presented is a rare opportunity to own some of the artifacts that Armstrong took and brought back on his mission, as well as personal items from the astronaut’s life.

Included from the Apollo mission is fabric from the left wing of the Wright Brother’s 1903 Flyer, a tie clip carried by Armstrong, and several flags flown on the mission.  Also present is Armstrong’s priceless Apollo 11 Robbins medallion with original Apollo 11 insignia. Traditionally these medals are only made available to astronauts and are flown on their missions, and have become the ultimate souvenir in space memorabilia. To further explore the fascinating auction and register to bid, go to Heritage Auctions.