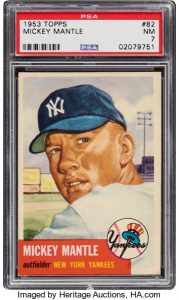 Mickey Mantle’s 1952 Topps card introduces him as the successor to Joe DiMaggio. During his playing career, Mantle managed to meet those high expectations, earning a spot in the Baseball Hall of Fame and a statue in Yankee Stadium’s Monument Park. Like the player himself, Mantle’s 1952 Topps card grew more appreciated over the years. “In 1952, [Topps] made the card larger, they used real photography, and they used statistics on the back,” said Chris Ivy of Heritage Auctions regarding that year’s cards. A near-mint Mickey Mantle card is available in the upcoming 1952 Topps & 1953 Topps PSA event presented by Heritage Auctions.

Also available in this auction are two Jackie Robinson cards from 1952 and 1953, respectively. Robinson broke the color barrier in baseball when he played for the Brooklyn Dodgers in 1947. Years later, his number would be retired by every major league team, the first time an athlete ever received that honor. The 1953 card available in this auction is in quality condition despite being susceptible to chipping along the edges, according to the Professional Sports Authenticator. Those interested in this or any other piece can register to bid on the Heritage Auctions website.