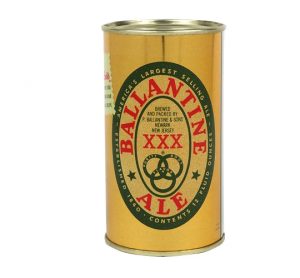 Featured in Tavern Trove’s upcoming auction is a Ballantine Ale can from P. Ballantine & Sons. Ballantine camouflage beer cans were produced and shipped to troops overseas during World War II. These cans were tinted olive green match the soldiers’ uniforms. Produced around 1957, the offered lot is a Grade 9.5 flat top can in excellent condition. The inscription at the center of the can reads “Withdrawn Free of Internal Revenue Tax For Exportation – Packed at the Brewery – Established 1840.”

Collectors can also consider a 1940 Knickerbocker beer can from The Ruppert Brewery. Jacob Ruppert, an American businessman and politician, founded the company in 1867. Knickerbocker beer became popular in New York City in the late 20th century. Also included in the sale are cans of Miller High Life beer, Golden Harvest beer, and Gilt Edge beer. Those interested in these or any other lots can register to bid on Bidsquare.