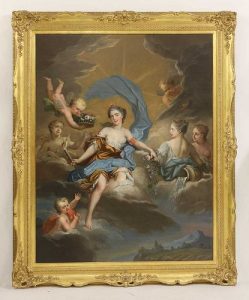 Two paintings by French artist Jacques-François Delyen headline the first day of the Fine Interiors sale, presented by Sworders. Born in 1684 in Ghent, Belgium, Delyen apprenticed under Parisian artist Nicolas de Largillièrre and specialized in portraits. He later went to the Royal Academy of Painting and Sculpture in Paris, where he exhibited his works several times. Jacques-François Delyen executed the available paintings, Aurora Triumphant and Diana and Endymion, in 1752.

Several pieces of Louis XV furniture are also represented in the catalog. The Louis XV era is often dubbed the ‘Golden Age of French Furniture.’ The furniture of this style is characterized by asymmetrical design, curved lines, and the use of giltwood. This includes a pair of Louis XV chairs from the mid-18th-century. The giltwood armchairs have padded seats and backs, curved legs, and a serpentine top rail. Two Chinese cloisonné attendant figures from the early 20th-century are also notable. While one of the figures is a warrior holding a guandao, the other has a gift in his hands. Visit Bidsquare to view more lots and to place a bid.