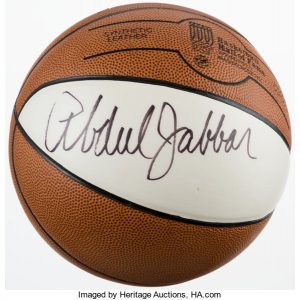 In 1928, a chemist trying to make rubber accidentally produced the first consumer-ready bubblegum. Meanwhile, in baseball, Babe Ruth was becoming a household name. These seemingly independent events coincided to allow the Goudey Gum Company to capitalize on the new popularity of gum. It marketed the new product to children using baseball cards of popular sports figures, including Babe Ruth. The Sports Collectibles auction, presented by Heritage Auctions, will offer two early Babe Ruth cards from the Goudey Gum Company, along with other sports memorabilia.

Both Babe Ruth cards were produced in 1933, the first year that Goudey packaged their gum with the cards. One of the available cards shows Ruth against a red background, while another places him on the field. On the reverse, both cards describe Ruth’s career. They include his trade from the Red Sox to the Yankees, his transition to becoming a hitter, and his following success.

Other notable baseball lots include a ball signed by 24 members of the 1957 Brooklyn Dodgers. The Dodgers franchise moved to Los Angeles the following year. Six members of the Baseball Hall of Fame signed the ball, including Pee Wee Reese, Roy Campanella, and Don Drysdale. While many of the auction’s highlighted lots are related to baseball, included are pieces from all major US sports. Basketball fans will find a ball signed by Kareem Abdul-Jabaar, the NBA’s all-time points leader. Bidders can register to bid and view each lot on the Heritage Auctions website.