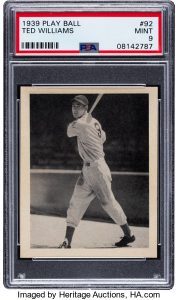 Day 1: To own a little something from the hall of fame is wonderful. The first day of the upcoming Summer Platinum Night Sports Collectibles Auction by Heritage features an array of such collectibles. The auction emphasizes on baseball, basketball, football, hockey and other sports, with starting bids ranging from $105 to $637,500. The highlight of the auction includes game-worn New York Yankees jersey by Lou Gehrig, a sportsman who held attributes of a ballplayer like no other. Unusual items such as Honus Wagner’s bat with provenance directly to Wagner himself and a baseball signed by Cobb is a valuable asset in the auction.

Day 2: Likewise, the second day of the auction does not fail to offer an enthusiastic collection for sports lovers. Ichiro Suzuki whose jersey is presented, was the only player in the history of Major League Baseball who has recorded a decade of prolific hitting. Few items among 500 lots are Ty Cobb cabinet photograph and Jeremy Lin game-worn New York Knicks jersey. View the complete catalog and register to bid online on Heritage Auction.