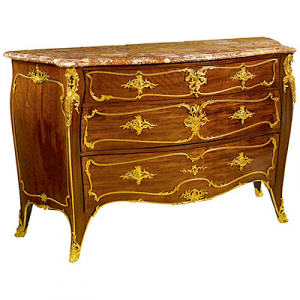 Despite its name, the Louis XV style of furniture was influenced more by the king’s long-term companion, Madame de Pompadour, than by the king himself. Furniture became more excessive and ornamental. After years of war, the wealthy patrons of France, including Madame de Pompadour, wanted spectacle. Furniture and decorative art are often a reflection of the cultures in which they’re made. The Summer Fine Antique Sale, a buy-now event offered by Solomon Treasure, includes many pieces that represent the 18th and 19th century in America, France, and other countries.

The sale includes a Louis XV mahogany commode made by German designer Joseph-Ìämmanuel Zwiener in 1885. Zwiener was internationally recognized for his designs and, four years after producing this commode, he was commissioned to do a bedroom suite for Kaiser Wilhelm II. Several pieces from this sale not only reflect the style of the 18th and 19th century but also depict some of its most notable figures. This includes a bust of America’s first president, George Washington, produced by Ferdinand Barbedienne Fondeur in 1880. Another example is a Royal Vienna Porcelain plate depicting Napoleon. Solomon Treasure notes that both the George Washington bust and Napoleon plate are in excellent condition. Those interested in any of these pieces can register to buy online on Bidsquare.