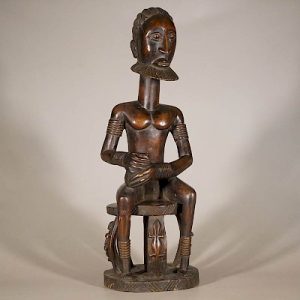 Most observers will primarily appreciate lots in the Sub-Saharan African Tribal Art auction offered by Discover African Art  as pieces of art. However, it is important to remember that artwork from this part of the world, in particular pieces from the Kingdom of Benin and the Edo Empire, usually served functional tasks such as documentation of a historic event or a ritual object. For some pieces, it is clear what purpose they once served, while others are shrouded in mystery.

Now, lots in the Sub-Saharan African Tribal Art auction serve modern clients as pieces of decorative art. One noteworthy lot is a bronze bust from the Kingdom of Benin. The bust is a detailed depiction of a woman’s face, hair, upper arms, and chest. Bronze heads are among the most iconic forms of art from the Kingdom of Benin (part of modern-day Nigeria). Other pieces in this auction with high estimated values are cast in bronze, including a Nigerian giraffe and a Benin aquamanile. An aquamanile is a jug used for storing water, typically shaped in the form of a human or animal. This particular aquamanile depicts three leopards, two soldiers, and has flower designs throughout.

Other pieces have a less obvious functional purpose such as the unusual Pende Mbangu figure, a featured lot in this auction. The Pende are an ethnic group in the modern-day Democratic Republic of the Congo. The figure is hand-carved with a unique two-toned sculpture technique. Potential buyers of this piece should take into consideration, though, the cracking on the head and body. View and register to bid for any of the pieces online on Bidsquare.