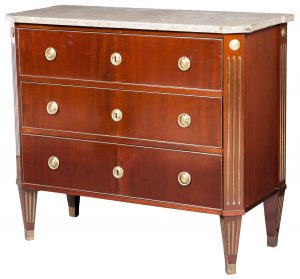 Doyle will feature the estate of Leon Amar in the upcoming Special Collections auction. A dominant figure in the design world, Amar’s career began at a Parisian global design firm in the 1960s. Amar eventually became Duke’s Vice President of the Southeast Asian Art and Culture Foundation and opened a museum of Thai and Burmese art at Duke Farms. In 1991, he married the twice-widowed philanthropist Charlotte Igoe in Palm Beach, where they shared their love of art. In the auction are several works by Dietz Edzard, a German Impressionist and Modern painter. Highlighted is an oil painting from Edzard titled Auto Portrait No. 5. The piece is dated 1913 and signed by the artist. The self-portrait shows the artist posing with a painter’s palette and brush.

A George II inlaid walnut longcase clock is also included. This clock features a dial with mask spandrels and is signed “John Ellicott, London.” It has a matted center with a date aperture and a five-pillar two-train movement with anchor escapement. The clock comes with a concave-sided cresting about the arched cornice that was added later. Other items in the event are a set of three inked papers from Wu Zuoren, an oil painting of a girl and her horse by Suzanne Eisendieck, a Marasali Shrivan prayer rug, and a collection of fashion books. Visit Doyle to view the entire collection and to register to bid.