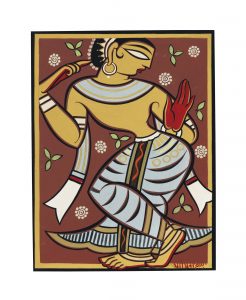 Christie’s South Asian Modern + Contemporary Art auction is an important collection of over 100 works by early pioneers of modern South Asian art as well as contemporary artists from the region.   Present are a group of early paintings by members of the Progressive Artists’ Group including Sayed Haider Raza, Francis Newton Souza, Maqbool Fida Husain, and Hari Ambadas Gade. These works sought to define what modern Indian art could and should be, and often combine styles and elements from a host of sources including folklore, cave fresco, and European influences like Cubism.  The results remain masterful experimentations on form, color, and composition; a sublime chapter in modern art.

An auction highlight from the Progressive Artists’ Group are two Francis Newton Souza portraits, Head in Landscape and Head of a Woman. Both borrow from primitivism and feature hints of Catholicism in their subject’s vestments, and are from a moment in the artist’s career that is widely viewed as his seminal.  Christie’s holds Head of a Woman to be “perhaps one of the finest examples of the genre to come to auction,”  and another Souza painting from this era is part of the Tate’s permanent collection.

Also included are a magical Sayed Haider Raza painting of a French village at night; a voluptuous reclining female nude by Sri Lankan painter George Keyt. Indian artist Bikash Bhattacharjee’s oil painting, The Visitors straddles realism and surrealism in a photorealistic image of a young woman. It complements the collection alongside other contemporary artists like Zarina and Mrinalini Mukherjee. Their work includes several photographs and sculptures. For the complete auction catalogue and to register to bid go to Christie’s.