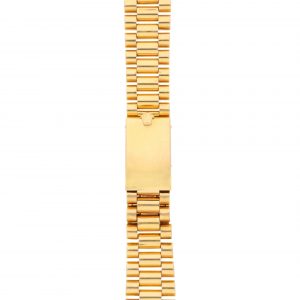 In the mid-20th century, the manufacturing company Gay Frères proved its versatility by making bracelets for most of the major watch brands, from Rolex to Patek Philippe. According to Hodinkee, Gay Frères understood early on the “nuances that distinguish a bracelet that pairs well with a dress watch from one that pairs well with a sports watch.” Representing Gay Frères in Sotheby’s Watches II auction is an 18-karat gold Rolex President bracelet from the late 1960s.

Patek Philippe collectors can consider the reference 5196 Calatrava from 2014. Reference 5196 is the successor to the original Calatrava reference, 96, and is designed to be a dress watch. Despite being produced in 2014, this wristwatch is intended to remind wearers of mid-century watch design. Register to bid in this event on Sotheby’s website and stay up to date on more upcoming sales with Auction Daily’s auction calendar.