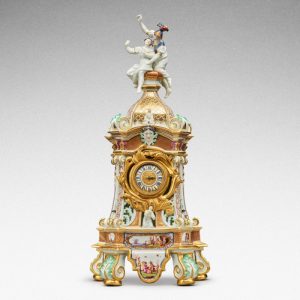 With support from the King of Poland, the Meissen factory near Dresden, Germany became the first hard-paste porcelain manufacturer in Europe. Meissen quickly became one of the most popular porcelain brands in the world. The day before Austria was annexed by Nazi Germany, sociologist and political economist Franz Oppenheimer and his wife fled Vienna, taking much of their Meissen porcelain collection with them. A German banker in Amsterdam later acquired part of this collection. Sotheby’s will offer a selection of Meissen porcelain items from the Oppenheimer collection in an upcoming sale.

Highlighted is a 1727 Meissen mantle clock case, the rarest piece from the Oppenheimer collection. Standing just over 17 inches tall, the timepiece features two figures at the peak of the roof with other figures near the bottom in various positions. Shades of purple, green, blue, and bronze detail the scenes. The clock’s dial has Roman numerals and a single hand. The underside of the case is inscribed with the words MeiBen 1727, and the movement is signed BARRY A PARIS.

Another notable lot is a rare Meissen armorial two-handled beaker. The beaker is part of the service that Augustus III, Elector of Saxony and King of Poland presented to Elizabeth Farnese, Queen of Spain. It celebrates the marriage of their children. The detailed beaker shows the Farnese family scroll flanked by a figure on either side. To view additional Meissen porcelain lots from the Oppenheimer Collection and to place a bid, visit Sotheby’s.